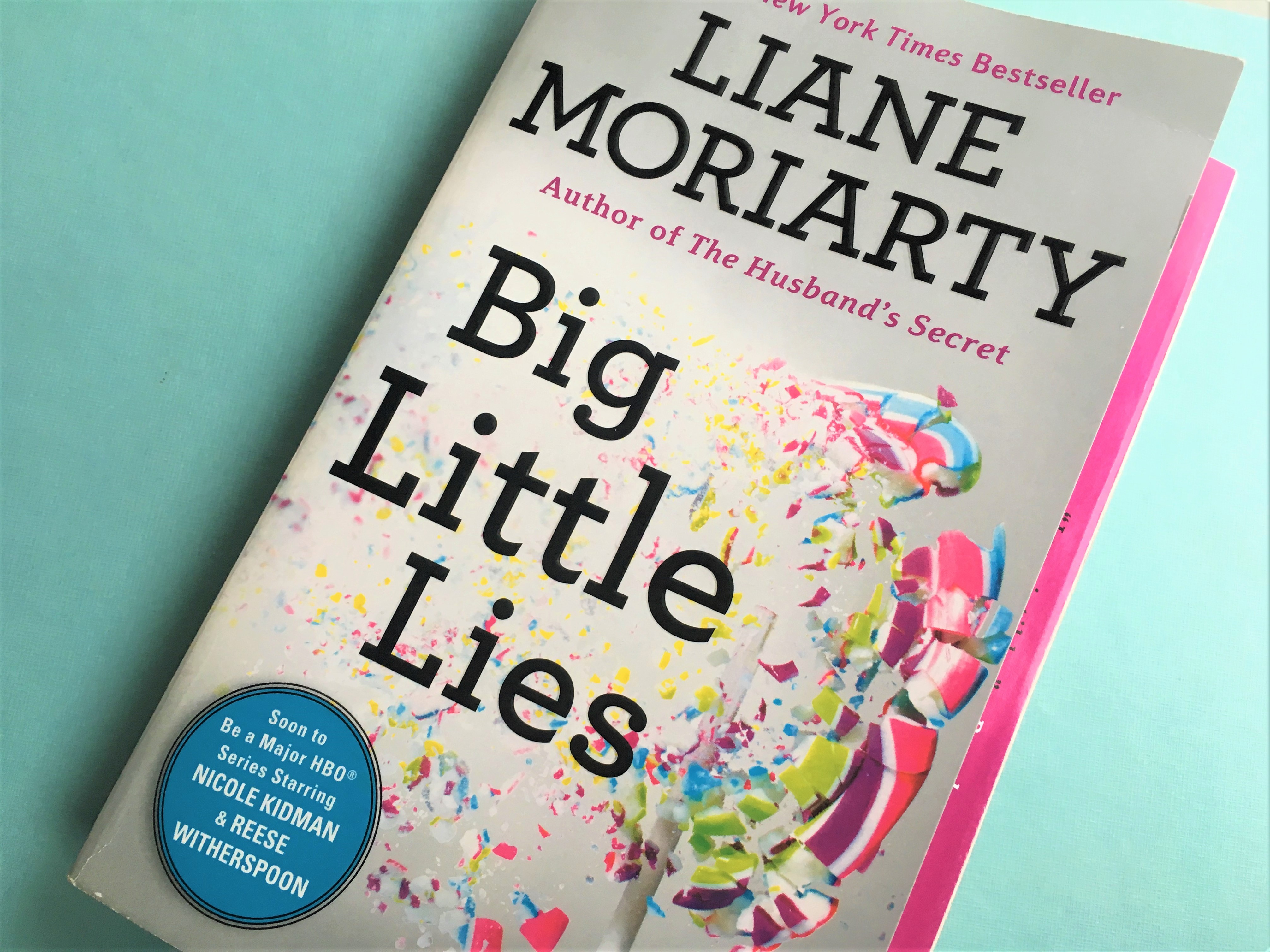 Writing a multiple-perspective novel or need help with challenging internal monologue? Use Big Little Lies, by Liane Moriarty, as a case study. It has three major characters. We listen to their complicated, sometimes stupid, often poignant thoughts, and we learn so much about them–and about ourselves–in the process.

And Moriarty knows how to be funny, even when discussing something deadly serious. Like murder.

I LOVED this book.

It starts out with a murder at an elementary school’s Parents’ Trivia Night.

Ooh! How serious. Let me grab my popcorn.

The opening pages promises I am in for a funny, clever romp, and it doesn’t disappoint. But it is also a trick. Because while I’m over here thinking this is going to be one of those lighthearted beach reads, suddenly it very much isn’t. And I am completely hooked.

I then spent the whole book wondering who dies, all while falling in love with Moriarty’s characters and silently begging that this person or that person wouldn’t be the person who gets offed. I also annoyed the bazeejees out of John by laughing out loud constantly. Not sorry.

While there are probably an infinite number of things I could have learned from reading this book, three things jumped out to me.

1. Throughout the book, Moriarty maintains suspense by constantly reminds the reader that there’s a murder coming. How does she do it?

2. The book is written from multiple perspectives, but there is no clear protagonist. And it works.

And most relevant to the novel I’m working on right now:

3. Moriarty is BRILLIANT with the internal monologue. Need to write an internal monologue that swings back and forth between different decisions or opinions? Or having a hard time writing that dramatic moment when your character learns something huge and has to think about it? Then learn from Moriarty. She’s a pro. 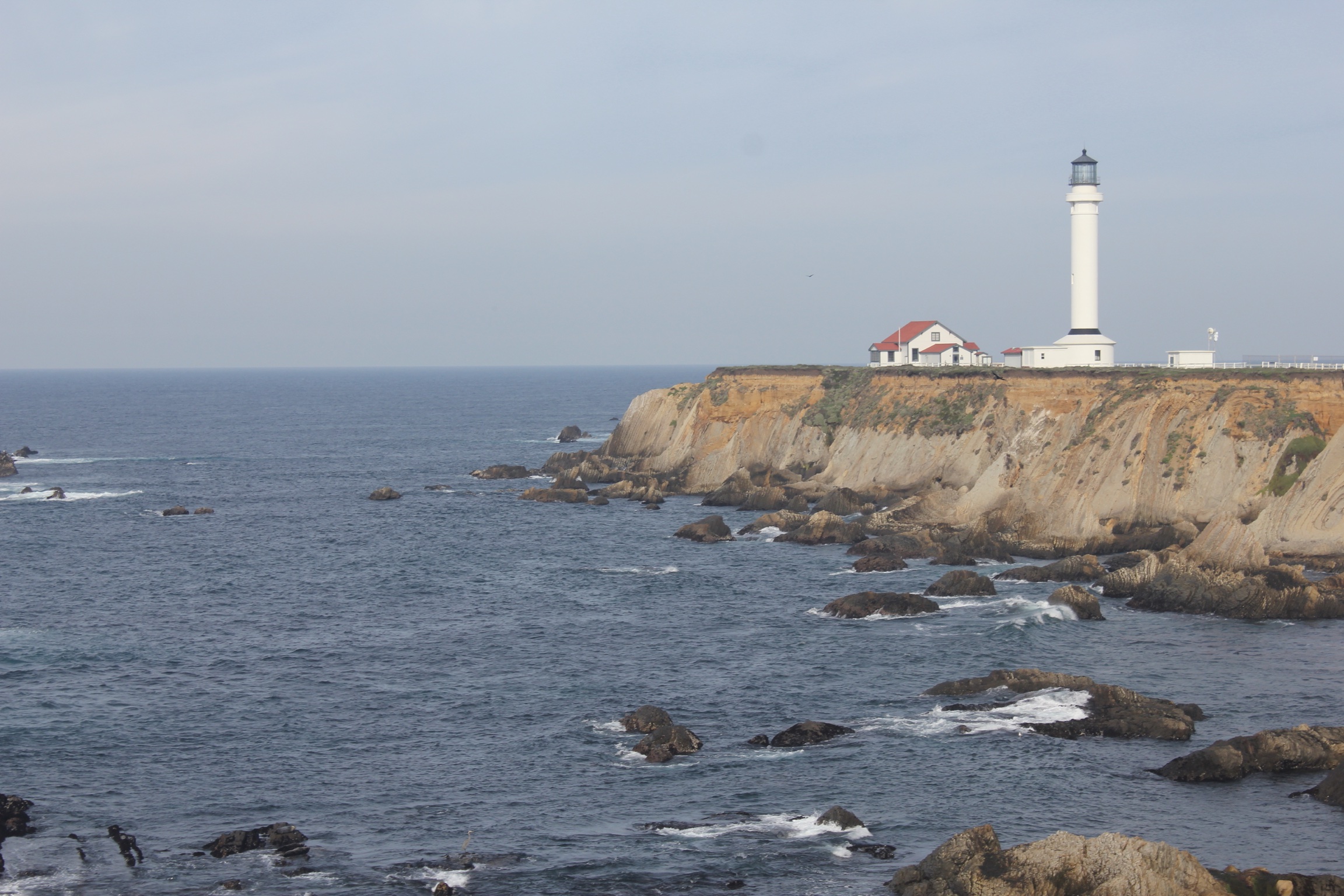 They said I needed pictures in my blog. So here. Pictures! They’re mine, from when I lived near the coast in Northern California. If you squint hard enough, maybe they look like the Australian coastline of Big Little Lie’s world. Maybe.

We start the novel with a murder, and then jump back in time (cued by chapter titles) to six months before the murder and work our way back to the main event.

While the book certainly starts off with a smash (pun very intended), it would have been easy for the story to slow down and get derailed once we start learning about each character and become invested in their lives.

But, to keep us focused on the climax of the book–Someone dies! Who?!–Moriarty brilliantly includes a brief transcript from the ongoing criminal investigation after every chapter (and sometimes in the middle of one), in which a number of parents from Parents’ Trivia Night are interviewed by an investigator.

Notably missing from these interviews? Our three main characters.

I tell you. Those transcripts were a brilliant idea.

And they’re funny. They constantly include a comment from one parent that is directly (and hilariously) contradicted by another parent, making for some great comedic relief and a reminder that two people can see even the smallest interaction completely differently.

The investigation interviews make me wish I could see older drafts of this novel. My suspicion is that they were late editions, added in during a later draft to amp up the suspense in response to reader feedback.

I can just hear it now.

Beta Reader: “I really like your characters. But by the time I got to the end, I’d totally forgotten someone was murdered. That snuck up on me.”

Moriarty goes home, cries (Isn’t that what we all do when we get feedback? Just me?) and then wonders to herself, How do I maintain suspense throughout the novel and keep people reminded of the murder without talking about it directly (because in the story, it hasn’t happened yet and no one knows it’s coming)?

Then, brilliant writer that she is, she comes up with the investigation interviews. And we stay invested in the promised pay-off. 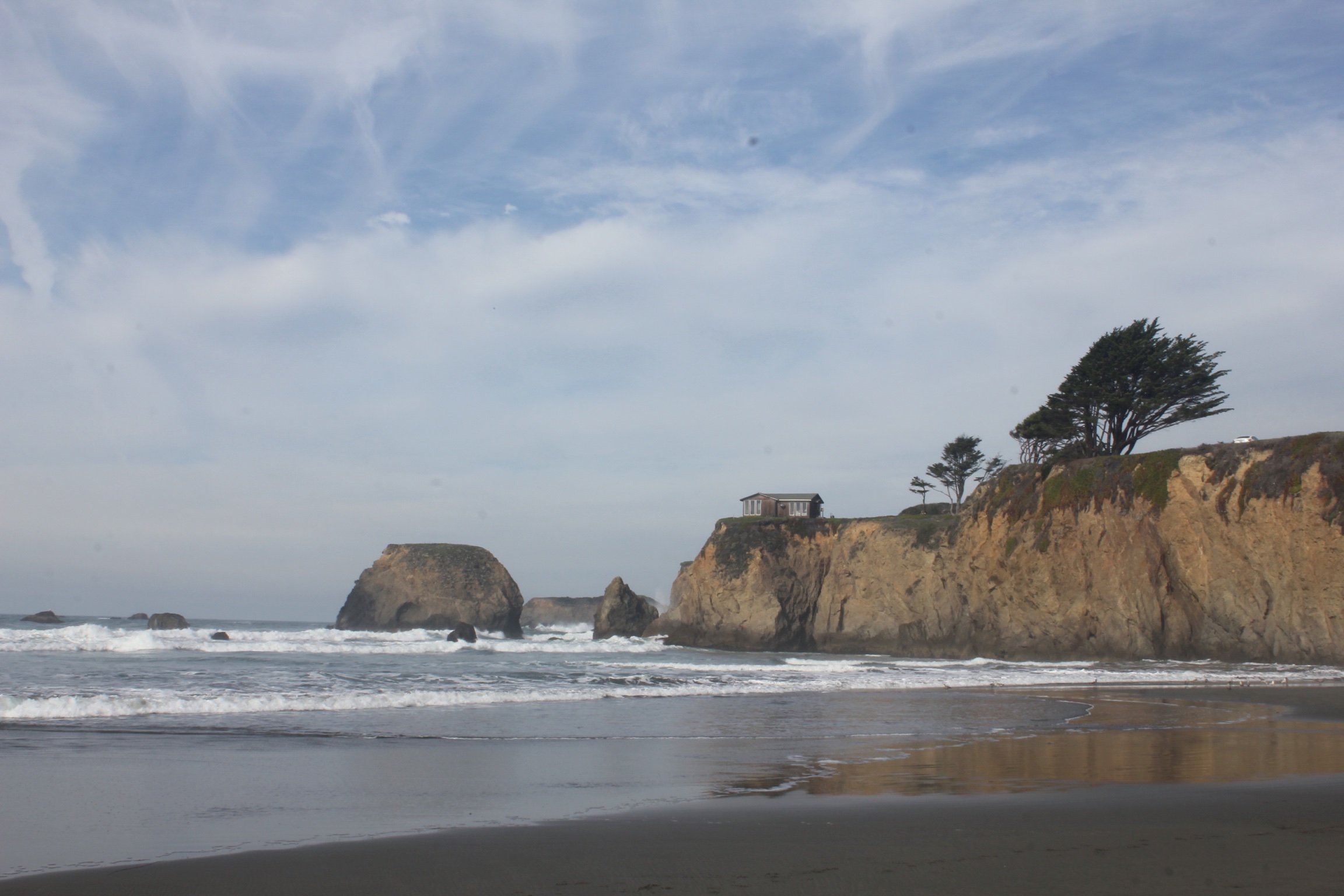 No Clear Protagonist in This Multiple-Perspective Novel

Big Little Lies is a great example of a multiple-perspectives novel. Sure, there are lots of them out there, and you could argue that it’s been done better elsewhere. Probably has. But I loved this book, and that’s enough for me.

The book jumps between the perspective of three characters: Jane, Madeline, and Celeste.

We start with Madeline. Then we switch to Jane, and I decide she’s more important. I don’t even realize how important Celeste is until a quarter of the way through the book. And then we end the book on her.

So who is the true protagonist in this novel? If the basic golden-rule for protagonists is that they must make a choice, then I think the main character here is Celeste. With Jane a close second. And Madeline a distant third.

I then did a quick analysis of “screen time.” Who do we hear from the most?

And the answer surprised me. Madeline has 33 chapters, Jane has 31, and Celeste has significantly fewer, at 25.

Suddenly, I wonder if my impression that Celeste has the biggest growth is because we end on her. Or because her story is more dramatic. And Madeline is far from a distant third. She’s the glue that holds the three women’s friendship together. She has the most “screen time,” and while her story may be more subtle than Celeste’s, I’d argue that many readers probably relate to her story the most (ex-husband, wayward teenager, turning forty).

I think the answer is no. All three characters go through their own complete narrative arcs, where they want something, make choices, and grow as people because of those experiences. No one is more important than the other, and I’m equally invested in all three.

And that’s all I need to love this book.

Only in novels can we get inside someone else’s mind. And it’s through this process, through observing someone’s thoughts and behaviors and then interrogating ourselves against them (Do I agree? Would I have done the same thing?), that we build empathy.

Because of that (and because I couldn’t stop mulling over it after I read it), I think the best part about this book–and the skill that I’d most like to emulate–is Moriarty’s excellent use of the internal monologue.

*SPOILER ALERT (after the picture of the ocean, because I’m a nice person) 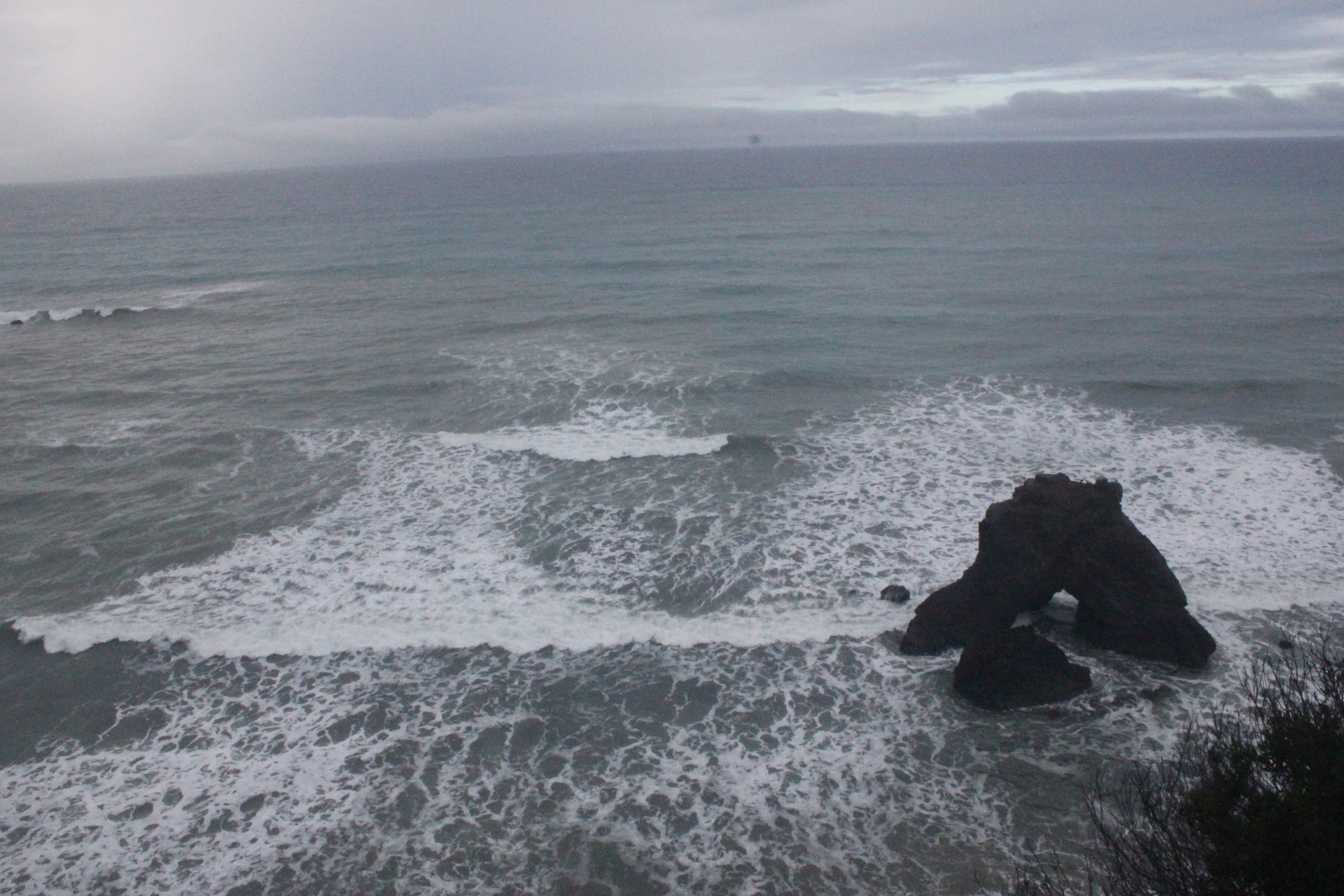 Moriarty is great at the short quips. But what she really crushes are those long internal monologues where the character is thinking something out. Percolating on some information. Changing their opinion mid-thought and then swinging back to their original idea once again.

*SPOILER ALERT (Again, just in case you didn’t pay attention to the first warning)(I mean it this time)(It’s here)

Madeline’s Internal Monologue About Rape, Feminism, and Her Marriage

The internal monologue that stood out to me the most was after Madeline learns that Jane was raped. In one short chapter (34), Moriarty brilliantly captures a person’s mental process as Madeline swings between all the ways she feels about Jane and her story, while constantly going back to the thing she’s most interested in and worried about–her own marriage and children (and her ex-husband and how much of a pain it is to live near him and his new wife). Human things. She’s worried about her friend, but worried about herself too.

The execution is excellent.

Honestly, just go read Chapter 34 yourself. I don’t think I can do it justice.

But here’s the gist–and what I love about it. Have your book open and ready to follow along.

How It Plays Out:

Madeline tells Jane’s story to her husband Ed, and he calls her a silly girl (read the chapter for context, cuz he really is a good guy). Madeline then thinks:

It was stupid for them to be fighting about this. A rational part of her mind knew this. She knew that Ed didn’t really blame Jane. She knew her husband was actually a better, nicer person than she was, and yet she couldn’t forgive him for that “silly girl” comment. It somehow represented a terrible wrong. As a woman, Madeline was obliged to be angry with Ed on Jane’s behalf, and for every other “silly girl,” and for herself, because after all, it could have happened to her too, and even a soft word like “silly” felt like a slap.

She recognizes where she’s being irrational, acknowledges Ed’s intent, and yet is still angry with him because the malignant tentacles of rape culture are present in his comment about Jane being a “silly girl” for getting raped.

Then, because Madeline is HUMAN, she promptly switches to thinking about her ex-husband Nathan and his annoyingly healthy, seemingly perfect new wife Bonnie.

That’s what was behind her sudden fury with him in the bedroom. It wasn’t really anything to do with the “silly girl” comment. It was because she was still angry with Ed over Abigail moving in with Nathan and Bonnie. . .

And then her thought process, half a page later, swings right back to Jane’s story.

What would she have done in Jane’s situation? She couldn’t imagine herself reacting the way Jane had. Madeline would have slapped him. . .

Perhaps this man specifically picked out girls who he knew would be vulnerable to his insults?

Or was this line of thought just another form of victim-blaming? This wouldn’t have happened to me. I would have fought. I wouldn’t have stood for it. He wouldn’t have shattered my self-respect. Jane had been completely vulnerable at the time, naked, in his bed, silly girl.

Madeline caught herself. “Silly girl.” She’d just thought exactly the same thing as Ed. She’d apologize in the morning. Well, she wouldn’t apologize out loud, but she might make him a soft-boiled egg, and he’d get the message.

As Madeline processes Jane’s story, she swings from self-righteous anger to judgement to embarrassment at being so judgemental. What’s more relatable than that? She’s human, and I think people love this book because of moments like this, when they recognize themselves in Madeline’s imperfections–her judgement and conflicted feelings and all.

Another place that Moriarty’s internal monologue skills shine are with Celeste.

There’s a crazy amount of self-deception in this book, and Celeste is the queen. We, the reader, know what is going on. We can see it clearly. So why can’t Celeste?! She’s infuriating. Or at least, she would be–except that we can see into her brain and listen to her rationalize and justify her husband’s behavior daily.

It’s terrifying. And so real. Reading an article on domestic violence will never, ever make me understand the challenges that women go through in this situation–the emotional conflict and inner turmoil–more than a novel like this.

And that is what makes novels the best thing on the face of the whole wide world. Building empathy by introducing us to people different than us.

My secret dream: Someday Liane Moriarty will write a little blurb for the book jacket of one of my novels, saying something quippy about how I made her laugh and how my character’s internal monologue made her think about people differently.

Seriously though. I love her style and enjoy her writing so much.

And I know that as I start revising my current novel, I will be pulling down my copy of Big Little Lies to study the mechanics of those internal monologues. Their length, their pace, their swing and duck and roundabouts. It’s going to be a great study tool.