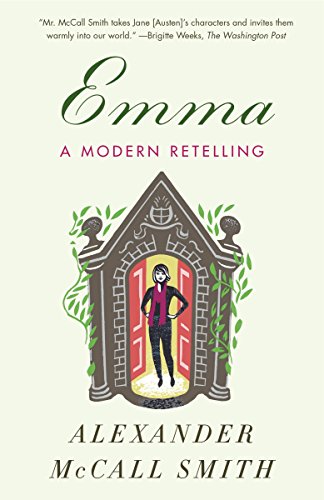 I picked up Emma because one of my major projects for 2018 is revising my current novel, a modern adaptation of Pride and Prejudice. So, naturally, to prepare, one of my main goals is to read as many Jane Austen adaptations as possible and take notes along the way.

Hated it. In fact, I didn’t even finish it, which is really rare for me. I’ll usually refuse to quit books out of some weird sense of guilt (“This author spent years on this book, so I owe him/her the decency of finishing it”), especially if I’ve already made it 65% of the way through. Like this one.

But I couldn’t do it. I have too many books to read this year.

Also, I might have been biased against the book from the start, because I also don’t particularly like the original Emma. It was fine, though probably my second least favorite Austen (after Northanger Abbey). In the original, Emma is a sweet, innocent, self-centered, spoiled young woman who loves the people around her and, wanting the best for them, thinks that she can meddle in their lives to make all their hopes and dreams come true. To disastrous effect.

In McCall Smith’s Emma, she’s a spoiled brat. She’s selfish, pushy, and even deliberately cruel sometimes, with no redeeming qualities sprinkled in to help us like her.

For a thorough book review, my favorite was by Smart Bitches, Trashy Books (such a great name). And of course, Goodreads is ever reliable.

What I’m really interested in asking (and answering) is where McCall Smith went wrong. He is a strong, prolific, well-loved writer. So why does everyone seem to dislike this book so much?

Here’s my guess. It boils down to two things:

And most importantly, how do I avoid these traps in my own work?

When It Comes to an Adaptation of Emma, People are Picky

One search for Emma produced such an overwhelming, exhaustive list of websites that I had to walk away from my laptop for a bit. Everybody has an opinion about everything Jane Austen has ever written, and they want to talk about it. A lot.

This is intimidating, for sure. Does this mean I should drop my own novel adaptation completely? No. I hope not. But it does mean that I should probably do some extended research as to which Jane Austen adaptations bombed, which didn’t, and the respective reasons why.

A Lazy Update vs. Complex Rewrite

Story consultant Michael Hauge once said that there’s no point in doing an adaptation if you tell exactly the same version of the story.

But that’s exactly what this book does. It’s the same exact story, except vaguely set in the modern world. There are Mini Coopers and Land Rovers and …. that might be it. Where’s the social media? Where’s the internet? Where are the countless other little reminders that this story is happening in the 21st century?

McCall Smith also made the choice to have his modern Emma live on a big estate in the country — almost exactly the same locale as the original. Little adapting necessary there. And, if the moive Clueless has taught me anything, it is that you can radically change the setting (and absolutely every other element of the story’s “world”) and still make a damn good adaptation.

It feels like McCall Smith never really made up his mind about the world or characters of his novel. Did he want his novel to feel old-fashioned or did he want it to be modern? Did he want his characters to be exactly the same or radically different than Austen’s? Hard to say. The result is that his book feels too close to the original without doing anything new.

“The only real point is whether adaptation is interesting and artistically inspired or whether it is dull and pedestrian, not whether it is original, part of a center or master narrative, or some kind of copy.”

Gordon Slethaug, in The Oxford Handbook of Adaptation Studies

How to Avoid “Lazy Adaptation Pitfalls” as a Writer

The problem is that after reading this book, I have learned absolutely nothing about how to avoid lazy adaptation pitfalls. Or any other pitfalls, for that matter. I don’t have any training in adaptations, and only recently started reading them with the express intention of learning from them for this upcoming novel project.

And, unfortunately, a sad half-hour of searching has only taught me that my Google-ing skills might be sub-par. I found zero writing-craft books on novel adaptations, lots of online articles with strong opinions but unclear authority (like this one and this one), and a zillion listicles about novels adapted from classics that already exist.

So what’s next for me? Lots of research.

BUT — what do I read? Where do I start? Calling out to the interwebs for help and reading suggestions!